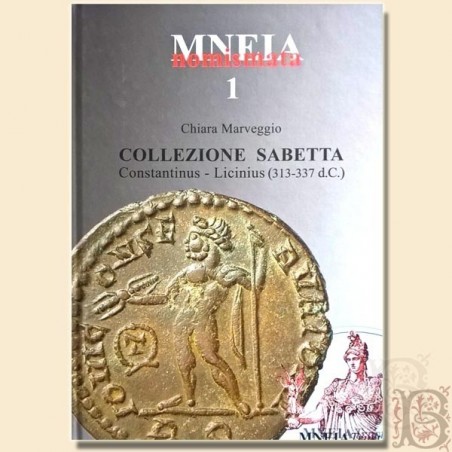 Luigi Sabetta was born in Ragusa, Dalmatia, on December 14, 1911. After completing his studies, he began a brilliant diplomatic career which continued until his retirement in 1977. Numismatics was a great passion of his. He devoted himself in particular to the coinage of the Constantinian period by writing several updating articles of the Roman Imperial Coinage (RIC) and collecting a rich and varied series of follis of the same period. Three years after Sabetta's death in 1989, this collection was sold by the family to the Civic Archaeological and Numismatic Collections of the Municipality of Milan. The catalog that we present here is the culmination of a whole life dedicated not only to collecting as an end in itself but also to the study and enhancement of what has been collected. Illustrated and classified are the 1701 so-called reduced follis of the Constantinian period within the seventh volume of the RIC which covers the period from 313 to 337. This volume of the RIC, published in 1966 and signed by Patrick M. Bruun, was a fundamental turning point in studies as it has rearranged a huge amount of material giving a new starting point for further discoveries. The RIC is organized by mints and not by issuing authority. At the time, in fact, there were many monetary workshops active from London, to the north, to reach Alexandria in Egypt via Trier, Lyon, Aquileia, etc. Each mint marked the coins with its own initials which changed from period to period, approximately every one or two years. Together they struck huge amounts of money on the basis of common instructions given by the government authorities. Furthermore, each mint was divided into workshops and each of these marked the coins produced, usually with a letter of the alphabet: A, B, C etc. The RIC has cataloged and chronologically ordered all the issues of each mint providing an extremely useful structure which, however, requires updates and corrections after so many years. Luigi Sabetta had already felt the need when he had started a series of articles published in the Italian Numismatic Magazine aimed at disclosing missing coins to the RIC and this is underlined by Chiara Marveggio, the author of this catalog, in her introduction. In fact, this work is not only an aseptic list of the coins selected by Sabetta but it is also an opportunity to point out and correct some choices made in the RIC. The author pointed out errors and inconsistencies in the RIC VII plan while still considering it, and for many years to come, fundamental and irreplaceable. For example, we discuss the laurel wreath which for the mints of Rome and Antioch is interpreted as a mint symbol while for Cyzicus and Nicomedia it is indicated as a simple representation. We then discuss legionary insignia, depictions of prisoners, mint symbols, etc., all based on some specimens from the Sabetta collection which are illustrated, enlarged, alongside. The actual catalog is structured not following the RIC but by emperor or authority. At the beginning all the coins of Constantine are listed following the mint order of the RIC. Followed by the coins of Licinius I, those of Licinius II, then those of the sons of Constantine, Crispo, etc., up to the anonymous ones in the name of Rome and Constantinople. The specimens are all excellently reproduced in color in final tables. Taking inspiration again from the Sabetta collection, the author has re-examined the question relating to the symbols that can be found on the back of the she-wolf in the reverse of the follis of the issue with Urbs Roma. Some coins missing from the RIC are studied in detail separately. This volume will become a reference text for the coinage of the period and an excellent aid for collectors who want to know more about the complex Constantinian period.