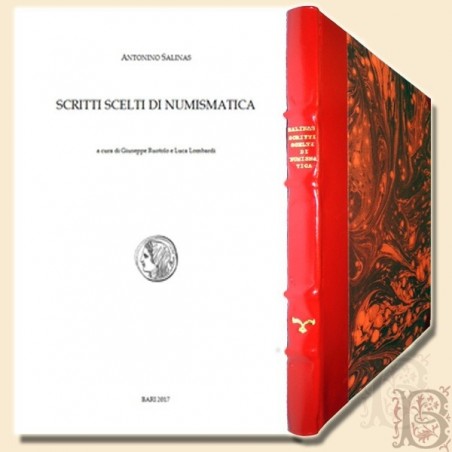 Collecting the insert "Tarì" published in the magazine "Monete Antiche" from n. 77 (September-October 2014) under no. 90 (November-December 2016), this volume proposes the ten most important scientific studies by Professor Antonino Salinas (1841-1914) which contributed to marking the main lines of that extraordinary and fruitful research activity that developed in Italy in the numismatic field. in the first decades of the twentieth century. The writings, today difficult to find, are: "Appendix to the memory on the Punic-Sicilian coins of Abbot Gr. Ugdulena and examination of the same", "On the publication entitled: Above some coins discovered in Sicily that recall the expedition of Agatocles in Africa ( memory of Fr. Giuseppe Romano, Paris 1862). Letter to Francesco Salesio Scavo "," Letter to M. the abbé professeur Gregorio Ugdulena sur deux pièces d'argent portant the nom phénicien d'Himêra et les types de Zancle et d ' Agrigente "," Examen de quelques contrefaçons antiques des tétradrachmes de Syracuse et du prétendu nom de graveur Eumélus "," Of two coins of Queen Philistides donated to the Royal Museum of Palermo (letter to comm. Gaetano Daita) "," Of two coins of the ancient city of Paropo in Sicily "," On the type of tetradrams of Segesta and on some numismatic representations of Pane Agreo "," On the type of female heads in Syracuse coins prior to the fourth century BC ", "Discover the Phoenician name of Erice (lit. was at the cav. Agostino Pepoli di Trapani) "," Numismatics and Italian public collections (conference held in the great hall of the Roman college on June 9, 1913) ". Published by Giuseppe Ruotolo and Luca Lombardi, the work was published in just 10 numbered copies and in a particularly well-finished editorial format. In large format, the volume is in fact published on ivory paper with artisanal binding consisting of fine leather, marbled paper, ribs, friezes and titles in gold on the spine, guards in lily paper.