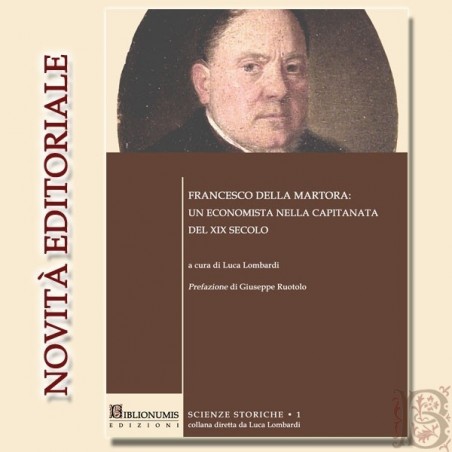 Francesco della Martora: an economist in the 19th century Capitanata, edited by Lombardi

Francesco della Martora (1809-1884) was a concrete protagonist of the economic, moral and civil development of the kingdom of the Two Sicilies, however his figure until now has been known only to a small circle of local scholars. Economist with an eclectic culture, with his multifaceted activity he played an important role in supporting, progressing and expanding the industry, agriculture and commerce of Capitanata and the surrounding areas, to the point that his ideas and his work were universally recognized. and appreciated. The analysis of the figure of Francesco della Martora and his activity is entrusted in this volume to two works. The first work, "A Foggia economist of the nineteenth century. Francesco della Martora", by Dr. A. Taronna, was prepared as a thesis for the Faculty of Law of the R. University of Bari, for the academic year 1931-32 . Unpublished to date and consisting of six chapters, the text is the result of careful investigation and presents the life, pragmatic nature and work of the economist of Capitanata with efficacy and compositional agility. The dissemination of this document after almost 90 years from its creation allows it to be rescued from oblivion, enriching with a piece the mosaic of the biographies published by the illustrious men of the kingdom of the Two Sicilies, in an area in which, today as at the time of the drafting of the work, is particularly lacking. This bibliographic insufficiency reveals the difficulties encountered by the author in his investigations and allows us to better appreciate the fruit of his labors. In the sparse bibliography available on the subject there is the "Funeral praise of the knight Francesco della Martora" made by E. Barone, the second work included in this volume. Printed for the first time in Foggia in 1884, for the types of the S. Pollice typolithographic establishment, it is anastatically re-proposed in this text to complete Dr. Taronna's paper. Two texts are therefore made available to scholars, as a tool for work and knowledge, from which peculiarities in the past little considered, or completely ignored, of the man della Martora and the economist della Martora emerge with vigor. Published by Luca Lombardi with a Preface by Giuseppe Ruotolo, the work, which constitutes the first volume of the Historical Sciences Series, was printed in a limited number of copies and on ivory paper. As proof of the exceptional nature of this publishing event, the publication is made under the aegis of the Italian Academy of Numismatic Studies.