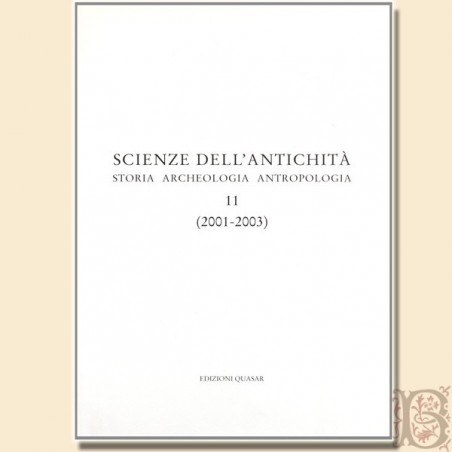 The volume includes the following contributions of numismatic interest: Arnaldi, Oceanus on coins and epigraphs; Bini, Bella this coin, how did they manage to make it? The answer is too simple: by coinage; M. Caccamo Caltabiano-P. Radici Colace, The history of Roman money in the Anonymous of the de rebus bellicis between ideology and economic-monetary realities; P. Calabria, Dikaiosyne, J.-P. Callu, Les impératrices pieuses et heureuses; Cazzella, Counting and weighing in the central Mediterranean during the Bronze Age; F. Ceci, A solid by Marciano and some aspects of the monetary iconography between paganism and Christianity; Cutroni Tusa, The mint of Agrigento during the second Punic war; F. della Ratta-Rinaldi, Monetary finds from Formello (Rome) and its territory; G. Dembski, Eine Goldfibel mit Stater Alexander III. aus Carnuntum; Di Vita, storeroom of Byzantine folles from Gortina (Crete); G. Gorini, Greek coins from Polesine; GL Gregori, Between numismatics and epigraphy: on the subject of congiarium, liberalitas, largitio and munificentia on coins and in inscriptions; G. Libero Mangieri, Two treasures of medieval coins from southern Italy; DF Maras, Numismatics and epigraphy. New observations on the qetis and leqez legend series; Morandi, Observations on some Etruscan monetary legends; F. Mori, Numismatique et préhistoire: un rapport indéniable mais submergé; NF Parise, Syrian measures and Mesopotamian measures in the Bronze Age; T. Pàroli, Coins and Gospels in England in the early Middle Ages; P. Pensabene, On some leaded cards for commercial use; R. Pera, On a Narbonense axis found in Savona; Perassi, Salonino's gold coin with frame from the excavations of the Catholic University of Milan; V. Picozzi, Antemio's Milanese Solido with an irregular mintmark; M. Rat-A. Castellotti, A golden shield of Gregory XIII of which only the memory remained; P. Serafin, A golden quinary from the Tiber; L. Villaronga, The Roman denarius weighed in the treasures of the Iberian Peninsula. Other contributions: E. Ascalone, The indigenous and the foreigner. Development of new integrative cultural paths between the second half of the III and the beginning of the II millennium BC on the Iranian plateau and in Susiana; D. Nadali, War and death: the annihilation of the enemy in the condition of being defeated; L. Nigro, The Rimush da Tello stele and the indication of the rank of the vanquished in the royal relief; L. Peyronel, Merchants in Susiana? Archaeological and epigraphic evidence on cultural relations between the Persian Gulf and southwestern Iran at the beginning of the 2nd mill. B.C; F. Pinnock, Foreign women and conquered women in Mesopotamian figurative culture: enemy women. The suburb: U. Fusco, Settlement dynamics in the north-eastern suburbs of Rome between the Republic and the Principality. Form and function: J. Evans-G. Recchia, Pottery function: trapped residues in Bronze Age pottery from Coppa Nevigata (Southern Italy); FR Stasolla, Between form and function: mortars in the Middle Ages; G. Vallarino, Objects for the combustion of aromas from Delos: the form and use in terminology; Recent discoveries: L. Nigro, A terracotta furniture shaped like an aeolian capital from Mozia. Lectures by the department: F. Wendorf-R. Schild, The Late Paleolithic burials at Jebel Sahaba: the earliest known warfare. Organ of the Department of Historical, Archaeological and Anthropological Sciences of Antiquity, this journal collects the results of aggregated research in thematic areas in the perspective of an integrated study of ancient societies in all their aspects - environmental, technological, economic, social, political, artistic , ideological - considered as interacting elements in systems with specific transformation dynamics. The studies that converge in it are conducted on different documentary materials - archaeological, philological-epigraphic, ecological-naturalistic, etc. - through equally different methodologies and analytical techniques, in view of the convergence of disciplines in a wider reciprocal interaction. The chronological and geographical location goes from prehistory to late antiquity and the Middle Ages, even if the prevailing interests are concentrated in the ages ranging from the near-eastern and European neolithization to the Greek and Roman world. The eleventh volume, relating to the years 2001-2003, includes essays divided into four themes that broaden the scientific interests to a broad geographical horizon, covering a chronological period from the prehistoric age to the Middle Ages.

Small signature of possession on the title page.

Slight signs of aging on the paperback, otherwise in excellent condition.