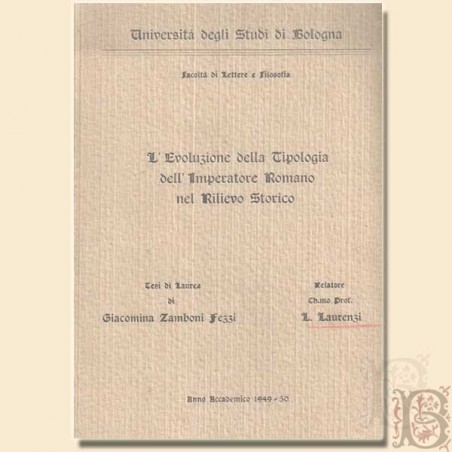 Zamboni Fezzi, The evolution of the typology of the Roman emperor in historical relief, rel. Laurenzi

Giacomina Zamboni Fezzi, The evolution of the typology of the Roman emperor in historical relief, supervisor Professor Luciano Laurenzi, University of Bologna, Faculty of Literature and Philosophy, Bologna 1950, pp. 176 typewritten on the recto, cm 29, br. with titles to the front plate.

Meticulous degree thesis, written according to scientific criteria, in which the author - through the filing and analysis of many works of the Roman imperial age - investigates the evolution of the iconography of the Roman emperor. The typescript, on watermarked paper, has several autograph corrections and additions and the ballpoint pen signature of Giacomina Zamboni Fezzi.

Professor Luciano Laurenzi (1902-1966), academician of the Lincei, distinguished archaeologist and historian of Greco-Roman art, was the author of numerous and appreciated publications. Among the many positions held, there are those of Superintendent of Antiquities of Milan, director of the Italian Archaeological School of Athens, director of the Civic and Archaeological Museum of Bologna and professor of archeology and history of Greek and Roman art.

Of high scientific interest and unique. In excellent general condition.