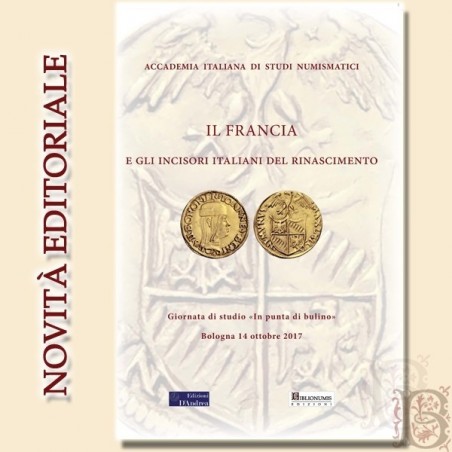 France and the Italian Renaissance engravers

Proceedings of the study day In punta di burino, held in Bologna on 14 October 2017.

At the top of the title page: Italian Academy of Numismatic Studies.

The volume France and the Italian engravers of the Renaissance presents the interventions proposed at the Study Day "In punta di burino", organized by the Italian Academy of Numismatic Studies on 14 October 2017, at the Archaeological Civic Museum of Bologna. In that circumstance, the limited time available prevented us from giving space to an adequate number of reports to deepen such a vast topic in the appropriate way. For this reason, in the book, some valid contributions made on the subject by other scholars are added to the interventions proposed on that day. The research presented makes interesting and new biographical, artistic and numismatic information available to the scientific community. The text opens with the Presentation by Dr. Giuseppe Ruotolo (president of the Italian Academy of Numismatic Studies), and with the Introduction by Dr. Michele Chimienti (vice president of the Italian Academy of Numismatic Studies). The writings follow: Michele Chimienti, Techniques for producing medals and coinage in the Renaissance; Guido Zavattoni, 15th century coin weights with effigy; Lorenzo Bellesia, The Mantuan Renaissance engravers; Franco Saetti, Renaissance engravers in the Po Valley courts; Michele Chimienti, Guglielmo Cassanelli, Francesco Raibolini, known as France, and the engravers active in Bologna during the Renaissance; Leonardo Mezz Wardrobe, The Renaissance engravers of the Veneto area, between classicism and modernity; Adolfo Modesti, Stefano Bertuzzi, The first papal medals from the origins to the time of Francesco Raibolini known as France; Roberto Ganganelli, Andrea Cavicchi, Between Pisanello and Cellini: engravers and medals in Central Italy; Alberto D'Andrea, The artistic renovatio in Naples under Ferdinand I of Aragon.