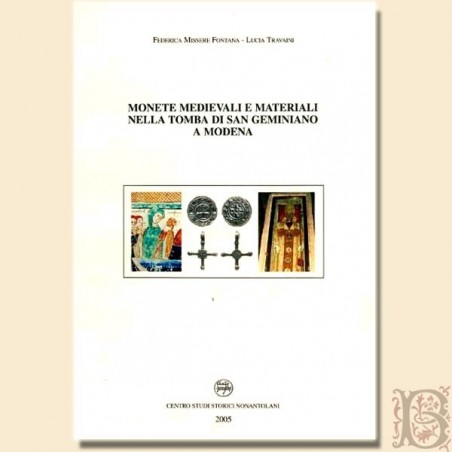 Missere Fontana, Travaini, Medieval coins and materials in the tomb of San Geminiano in Modena

For some decades, medieval history scholars have made use of "material" sources with renewed interest. These have offered and still offer a notable contribution to the knowledge of the past, as demonstrated in an exemplary way by the present work conducted jointly by Federica Missere Fontana and Lucia Travaini. Of course, thinking of the tomb of a saint as a "material" source can produce some perplexity and disorientation in the common opinion. A saint is a saint and a tomb is a tomb: with all the sacral implications that a saint and a tomb generate. Yet, the two scholars show that there are different ways of approaching one (the saint) and the other (the tomb), suggested in particular by certain objects contained in the chapel of San Geminiano in Modena. Above all, the set of coins found during the reconnaissance in 1955 arouses curiosity and interest. The seventy-two pieces were deposited, according to the precise and convincing reconstruction offered by the scholars, in two very important dates for the cult of San Geminiano: 1106, when the translation of the saint's body took place; 1184, when the first reconnaissance was carried out. On the other hand, numismatics has long acquired methodological awareness that has opened it to new horizons: so much so as to propose urgent and not secondary questions to other research sectors. Why the coins in the tombs of the saints? The presence of coins in the tombs of the saints - even in that of St. Francis in Assisi - is attested since the very ancient times of Christian history, certainly from the fourth century. Nonetheless, historians and hagiographers have never dealt with it in an extensive and systematic way even though it is an unavoidable topic.

Publication in excellent condition and uncommon.