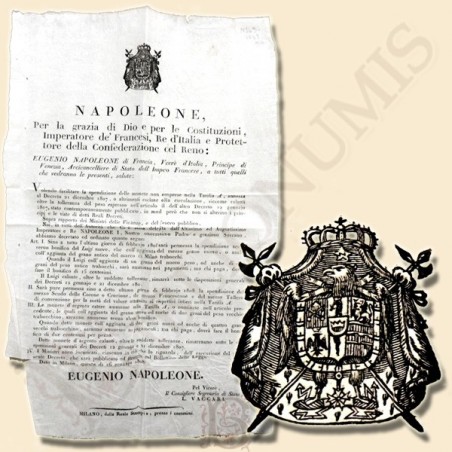 Napoleon, By the grace of God and the Constitutions, Emperor of the French, King of Italy and Protector of the Confederation of the Rhine: Eugene Napoleon of France, Viceroy of Italy, Prince of Venice, Archchancellor of State of the French Empire, to all those who see these, health: Wanting to facilitate the spending of coins not included in Tariff A, annexed to the Decree of 21 December 1807, or otherwise excluded from circulation, as they fall beyond the tolerance of the weight expressed in article III of the other Decree of 12 January 1807, which was published at the same time, so that the principles and views of these Royal Decrees are not altered. Above report of the Ministers of Finance, and of the Public Treasury, We, by virtue of the Authority which has been attached to Us by the Most High and August Emperor and King Napoleon I, Our most honored Father and gracious Sovereign, have decreed and ordered the following: - Art. I, Up to the entire last day of February 1808, the spending of the new Luigi without any transfer will be permitted, which overflows with the addition of half a new grain, or even with the addition of the ancient grain of the mark of Milan. When Luigi, with the addition of a grain of the new weight, or even two grains of the old weight, overflows, he will be allowed to pay, but whoever pays must make the transfer of 15 cents. The waning Louis, beyond the aforementioned tolerances, will remain under the general provisions of the Decrees of 12 January and 21 December 1807. - II, The spending of the half Scudo delle Corone or Crocione, of the half Francescone will also be permitted until the last day of February 1808. and of the half convention tolar for half of the value attributed to the respective whole in Tariff A. - III, The foreign silver coins admitted in Tariff A, or mentioned in the previous article, which with the addition of new grain or even of two grains of the old weight overflow, will be admitted without any transfer. When said coins with the addition of two new grains or even four old grains overflow, payments will be allowed, but whoever pays must make the transfer of two cents per piece. In addition to the aforementioned tolerances, these silver coins will remain under the general provisions of the Decrees of 12 January and 21 December 1807. - IV, The Ministers are responsible, each in what concerns him, for the execution of this Decree, which will be published and inserted in the Bulletin of Laws. Given in Milan, this day January 16, 1808. Eugenio Napoleone. Pel Vicerè, The Councilor Secretary of State L. Vaccari, from the Reale Stamperia, p. 1, ill., 42 cm.