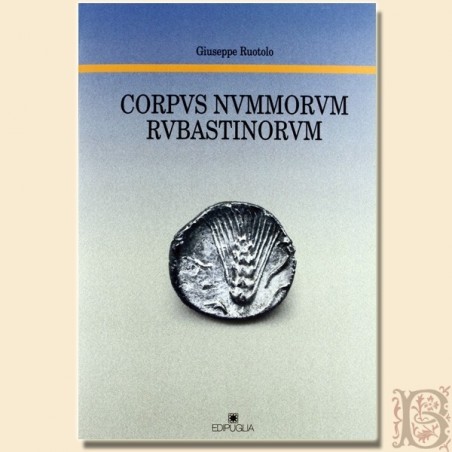 The catalog of the coins of the Ruvo mint, the ancient Rubi, divided by issues in silver (diobolas, odoli and emioboli) and copper (large, medium and small module), as well as on the basis of the iconographies accompanied by legends, constitutes only the second part of this volume. The work is introduced by in-depth studies aimed at enhancing the historical context of use, exchanges and movements of the circulation of these objects. The first chapter is dedicated to the Iapyges, a people of Apulia whose analysis is developed with reference to literary sources and in particular to the cults of Aphrodite, Damatra, Zeus, Athena, Heracles, Elios, Tyche and Diana, whose attributes, combined with knowledge of the ancient religious world, they proved to be preparatory for understanding the choices of iconographies and objects on the coins as well as testifying to an achieved degree of cultural, religious, civil and political uniformity of the same population. The study of monetary symbols is also used to better interpret the pre-eminent production of the territories that issued coins: in the specific case of Ruvo, the ear of corn, together with the bull's head and the kotyliscos, refer to an agricultural economy, breeding and production of terracotta. Finally, the coinage of ancient Apulia and the relationship with the territory of Peucezia are reviewed. The second chapter examines the history of numismatic studies and collections starting from the first half of the 18th century. Among the scholars we can mention, for example, Domenico Magnan, who first assigned the copper type to Rubi's pólis with the representation of the head of Athena galeata on one side and the other with the imprint of the owl placed on a twig olive tree accompanied by the Rubasteinon legend; Francesco M. Avellino and later the canon Giacomo Ursi, conceived the first catalogs on the Ruvo mint and, finally, the reflections that historically fixed the ruvesi numismatic characters developed in the publications of Giovanni senior, junior and Giulio Jatta. These discussions are followed by the analysis of recent studies from 1966 to 2008. In the third and final chapter before the tables (on the average weights and denominations of the Tarentum coins and on the weight reduction of the Roman axis), the themes of weight systems ('Achaean', 'reduced tarantino' and 'Campania'), the issues of monetary epigraphy and the circulation area of Rubi's issues with the discussion on the chronology on which remains an open question among scholars who opposes the traditional hypothesis, which had set the start starting from the fourth century. BC, and the most recent one that lowers that date, limiting the issue to the second century. B.C

Signature of belonging to the title page.